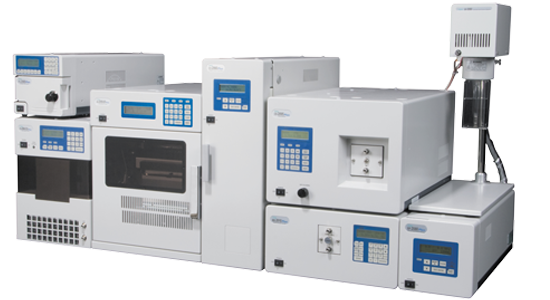 The PU-2080-CO2 pump is analytically programmable and it has a Peltier cooling pump head, which enables it to transfer the mobile phase in the SFE/SFC/HPLC system. In the case of using it as a HPLC pump, the cooling can be turned off. Gradient composition is possible with a supplemented PU-2080 pump. The PU-2080-CO2 pump uses the Slow-Suction – Quick Delivery (SSQD) method, also used with the JASCO HPLC pumps, for the transfer of the mobile phase. This method allows pulsation free, smooth transfer, thereby, achieving reproducible separation and extraction. The instrument has a built-in controller, which can be programmed with buttons or controlled with the JASCO ChromNav chromatographic software.

The PU-2086-CO2 semi-preparative programmable pump has a water-cooled pump head, which enables it to transfer the mobile phase in the SFE/SFC/HPLC system. The recommended cooling temperature in the case of carbon dioxide mobile phase is -10°C. High-pressure gradient composition is possible with a supplemented PU-2086 pump. Due to the SSQD pumping mode and the specially designed pump head, it provides stable mobile phase delivery performance, even when using high-flow speeds. The instrument can be controlled with its built-in controller – with buttons – or with the JASCO ChromNav software.

Providing a stable pressure is the most important condition for the supercritical extraction and separation. This can be achieved with the BP-2080 pressure regulator, in which a thermostated needle of variable resistance provides the pressure control in the case of the SFE/SFC separations done with supercritical carbon dioxide. The high-speed vibration and thermostating of the needle prevent the potential needle blocks which can be caused by high viscosity or solid samples. The instrument has an own controller, and versus time, it is capable of pre-programmed changing of the pressure and temperature. A heated extractum drain can be connected to the BP-2080, which provides the heating of the sample after the separator valve, thereby, preventing the precipitation. For fraction collection, a 1-in-6-out switching valve and a fraction collector can be used. The valve can be controlled either with the ChromNav software or from the JASCO pump.

With the 120 position – in its standard configuration – AS-2059-SF autosampler the sample dosing can be achieved both in the supercritical chromatographic system and in the HPLC system. The sampler can be used with variable and fix injection modes, as well. For samples that require thermostating, the AS-2059-SF autosampler with cooled and heated sample holder, supplemented with the TC-2059 Peltier thermostat, is recommended.

Diode-array, UV-Vis, circular dichroism HPLC detectors, supplemented with a special high-pressure cell, can be used for the detection of the separated substances. Equipped with the standard, high-sensitivity cell, the modules can be operated as HPLC detectors. Their specifications are identical with the ones listed at the HPLC detectors.

For the controlling of the SFC/SFE/HPLC system, the JASCO ChromNav chromatographic software can be used. It controls the various modules and provides complete chromatographic data processing. With the 3-dimensional data processing based on the spectra of the signals supplied by the JASCO MD-2010/2015/2018 diode-array detectors, peak identification and peak purity verification is possible. A spectrum library can be created from the spectra recorded during the detection. The software features are identical with the ones written at HPLC softwares.

You can find out more about which cookies we are using or switch them off in settings.

This website uses cookies so that we can provide you with the best user experience possible. Cookie information is stored in your browser and performs functions such as recognising you when you return to our website and helping our team to understand which sections of the website you find most interesting and useful.

Strictly Necessary Cookie should be enabled at all times so that we can save your preferences for cookie settings.

If you disable this cookie, we will not be able to save your preferences. This means that every time you visit this website you will need to enable or disable cookies again.